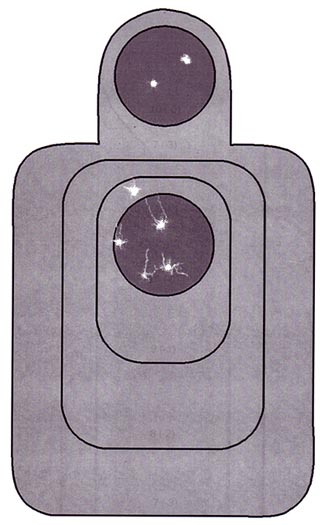 How much accuracy do you need, and should it come from your gun or from you?

Some people obsess over the accuracy of their firearms.  Others laugh and dismiss the concept as irrelevant, saying something like “the gun shoots so much better than I can, so it doesn’t really matter exactly how accurate the gun itself is”.

If they cite numbers, they might say “I can shoot to within about 6″ of the point I’m aiming at.  But these two firearms will shoot to within 1″ or 2″ of the aiming point, so with my 6″ limitation, who cares if the gun is accurate to 1″ or 2”.

When expressed like that, it sounds almost sensible, doesn’t it.  But don’t be fooled by things that seem almost sensible!  The key fallacy in the reasoning is that the errors are cumulative.  Your plus or minus 6″ of accuracy has to have the gun’s accuracy added to it.  If the firearm is +/- 2″, now in total you have a system that is +/- 8″.

And, wait, there’s also the accuracy limitations of the ammunition you’re using, too.  That might be another inch or two of (in)accuracy, bringing you now up to +/- 10″.  And that’s before you start to think of all the other issues that can impact on accuracy when the distance you are shooting to/from starts to extend.  Temperature.  Barometric pressure.  Of course, wind.  Uphill/downhill.  And so on.

If you are considering accuracy in the context of the increasingly popular sport of precision rifle shooting, these are all important factors that you’ll want to optimize, and it certainly makes sense to start off with a rifle that gives you sub-MOA accuracy.

If you’re thinking more in the context of defensive handgun use, this often boils down to unaimed instinctive pointing.  Instead of measuring distances in hundreds of yards, you’re considering a fewer number of inches.  Instead of tiny bulls-eye circles, you are simply trying for chest type shots.  In these cases, accuracy is indeed less of an imperative consideration.

But, having conceded that accuracy means different things in different contexts, we’re certainly not suggesting that accuracy doesn’t matter in a self-defense situation.  As easy as it might seem to hit man-sized targets at close range, the statistics on hits vs misses in real shooting encounters show that when under stress, not only ordinary people but trained police officers tend to shoot appallingly poorly.  Other articles on our site give examples of such poor shooting.

Which brings up another possible reason for not considering the accuracy of your firearm.  If you can’t hit a one foot square target at 10 ft, does it really matter whether your pistol’s accuracy is within 0.5″ or 1.0″ or even 2.0″ at that same range?  Shouldn’t you spend money on better personal training rather than a more accurate pistol?

Yes and no.  And, of course, we always advocate you should invest in ongoing personal training.  But we also recommend you should start off with the best possible pistol choice, within general limits of realistic cost and functionality.

This is a heavily modified CZ-75 pistol suitable for IPSC competitive shooting, but not something we’d choose for defensive carry.

Here’s an interesting thing.  The most exquisitely accurate pistols are also quite likely the least reliable.  They are hand-crafted to such fine tolerances that they become more readily troubled by dirt, sand, and other contamination, and they can also be very fussy about which types of ammunition they will reliably feed and cycle.

So don’t go too far down the ‘better accuracy’ path for a defensive handgun, where its prime mission is to be 99.9% reliable rather than 99.9% accurate.  But in general, better defensive handguns will be more accurate than inferior defensive handguns, so getting a ‘better than average’ handgun is good for every reason.

Furthermore, while it is true that if you can’t hit a one foot square at 10 ft, you have more important things to improve than your pistol, what happens when the scenario you’re responding to is more challenging than this ‘easy’ scenario.  There are five classic scenarios where improved accuracy is much more essential

Although we’ve listed five separate scenarios where accuracy is important, the reality is that you might find yourself facing a situation with elements of two or three or more of these five factors, making accuracy even more important still.

In such a case, while it mightn’t seem like much, but having a firearm that cuts off a couple of inches of inaccuracy, and ammunition that takes away another inch or two of inaccuracy, gives you a 3″ or 4″ accuracy advantage that might mean the difference between succeeding at stopping the deadly threat or failing.

What Makes for an Accurate Pistol?

There are many factors that add up to how accurate a pistol is, and most of them are not easily measured or evaluated by you when making a buying choice.  These obscured factors have to do with the relationship between the barrel and the sights – typically you have a floating barrel, and sights that are mounted on the top of the pistol’s slide.  If the barrel isn’t consistently aligned with the sights, then your accuracy is going to degrade.

Other not obvious factors include the barrel itself – the tolerances by which it was manufactured, and how worn it is, as well as possibly any damage to its crown (the end of the barrel that the bullet comes out from).

Good gun reviews might give you some feeling for pistol accuracy, and good pistol companies will sometimes even quote or guarantee certain levels of accuracy.

There are some factors that you can easily understand and evaluate, however.  Most of all, you want good sights and as much length between the front and rear sight as possible.

Talking about length, and, yes guys, size does matter, in general longer barrels tend to be more accurate than shorter barrels, and also allow for more of the cartridge’s energy to transfer to the bullet, sending it downrange faster and with more hitting power.

Still on size, a decent stock on your pistol which you can grasp with all your fingers is also important, giving you a more stable firing platform.

Another consideration is the type of trigger in your pistol.  If you’ve a revolver or some types of double-action only pistol, with a long and heavy trigger pull, it is going to be very much harder to control your pistol and experience accurate shots.  A striker-fired pistol or a single-action pistol – both with shorter/lighter trigger pulls – will give you much better accuracy.

Still one more consideration is the pistol’s weight.  The heavier the pistol, the less the felt recoil, and the better you can control it.

One more consideration is caliber, which is why the FBI returned back to the 9mm round, which they feel to be the best compromise between stopping power, accuracy, and the ability to rapidly get many rounds downrange.

Talking about caliber, don’t forget your ammo choice, too.  Sure, stopping power is important, but what use is stopping power if the bullet whizzes harmlessly past your target.  Get ammunition that is as accurate as possible.

You can never have too much accuracy.

Get the most accurate pistol you can justify and which remains suitable for its intended purpose (very different as between, for example, a ‘nightstand gun’ at home, and a concealed carry pistol in an environment where it is essential that the pistol remain unseen).

And then, train with it to improve your part of the total accuracy equation too.